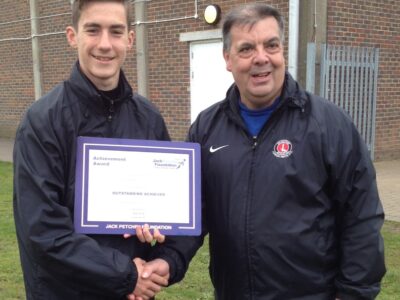 George has been awarded the Jack Petchey Achievement Award for September 2015.

Manager Alan said “George supports me in coaching the u12 Spartans squad. He is a continual inspiration for different training drills (especially the agility ladder) and the boys really respect George’s input. He also completed his refereeing course last year and has officiated a number of games last season and this. At school he has completed the First for Sport Level 2 Award for Leadership through Football. Finally George is always willing to help the club and this year he attended the Danson Fun Day were he assisted in running one of the “beat the goalie” stands. Keep up the good work George”.

Congratulations George from all at the club. 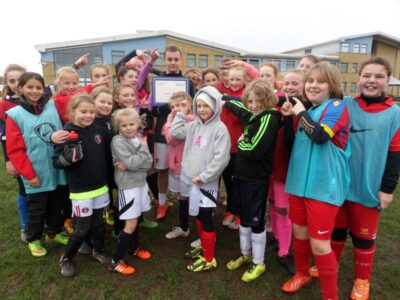 Jake was specially recognised in December for his services to Junior Reds. Jake was presented with the “Jack Petchey” award for his work with the Under 12 Girls section by Co-ordinator, Clive Hall-Strutt. Jake has been an ever present twice a week since the early Summer and assisted with the successful Danson Fun Day in August. Recently Jake qualified as one of the Club’s youngest ever Coaches. Coach Yusuf Kayalar said “Jake is a valuable member of the Girls football section. He is always reliable, punctual and gives excellent support to me in Managing the Robins. He is a pleasure to work with and a popular Coach”.

Congratulations Jake from all at the club. 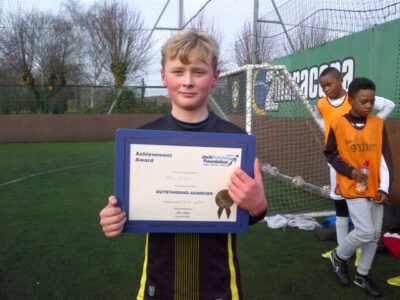 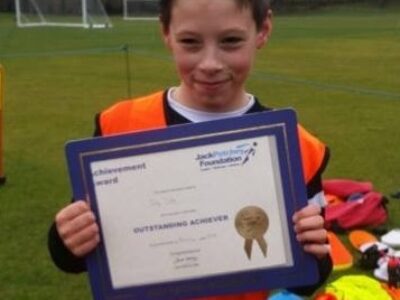 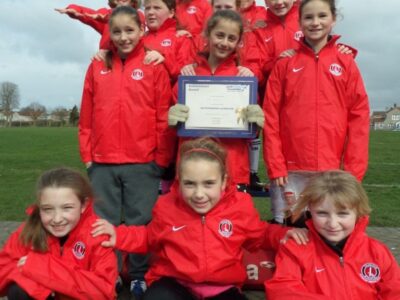 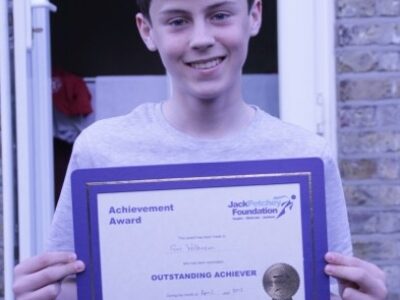 Gus has been a part of the Junior Reds Spartans team since January 2014 when he was signed after leaving Leeford FC.  He made an immediate impact to the team and made the right midfield position his own, featuring in all 13 games from January to the end of the season in May.  Gus has showed outstanding behaviour and a real dedication to his football in his time with the team and was a major factor in securing a solid mid table finish in the Selkent B West League and also finishing as Runners-Up in the Green Shield Final during the 2013/2014 season.After a solid pre season in August 2014, Gus unfortunately sustained a serious injury in our first friendly of the new campaign.  After a trip to the hospital it was revealed that he had damaged the ligaments in the back of his leg which would mean he would miss at least the first 6 weeks of the season. The reason that I am nominating Gus for the Jack Petchey Award is due to his outstanding commitment to the team. Week after week, and in rain or shine, Gus arrived with his Dad Paul to every game on his crutches to support his teammates that were fortunate enough to be playing.  He was on hand to encourage and congratulate his team mates for their efforts as we made a winning start to the 2014/2015 campaign. Gus returned to training in late October and made his comeback in the 2nd half of the game the following weekend against Long Lane Tigers.  Unfortunately as he took a shot shortly after coming on as a substitute, he felt the same muscle pull again and was left in a heap on the pitch as his hard work to recover from the original injury had been undone within 5 minutes of his comeback.  Gus faced a further 4 weeks out of the team but again returned every Sunday with his crutches to support the other players in the team.  After numerous visits to the hospital to see the physio, he began light training again with the team on a Friday evening and finally made his full recovery to the team in January 2015 against Orpington FC. Gus has shown outstanding commitment to the team by turning up week after week and I believe that from this he is a not only a valued member of the Spartans team but of the Club as a whole.  He has displayed the ‘Junior Reds spirit’ during difficult and frustrating times over the past 4 months but has come back even stronger as a player and as a young man.  Gus is a pleasure to coach as he is so easy to work with.  He has a great sense of humour and listens to every word both I and his team mates say to him as he is always looking to learn and to improve. Gus is always congratulated and recognised by his fellow players and all of the other parents for his brilliant attitude to his football both at training and then on a match day.

Connor Sanders is this months winner of the Jack Petchey Award. A volunteer who has been helping out with the Junior Reds Valiants team since it was formed at the beginning of the 2012/13 season. Connor has recently been named as assistant coach for the U9 Valliants and is also a great match day official, always acting in a very professional manner towards all teams. He is a great role model for the kids in the team and always applies himself in a positive manner. 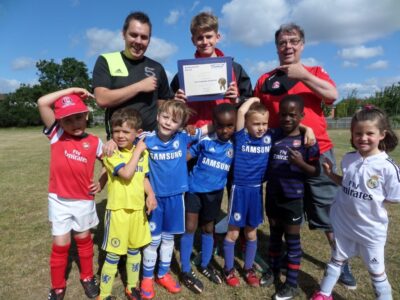 James has been awarded the Jack Petchey Achievement Award for June 2015. James has played for the Under 17 Sabres team over several years and is a true “ever present”. He is dependable and is considerate to others. James always plays to the best of his ability and displays high levels of sportsmanship.

Picture above are James, Clive Hall-Strutt (Jack Petcher Co-ordinator), Terry McGrath and his new Under 7 Valiants team. James was told his contributions and attitude had been recognised under the Jack Petchey scheme before the Under 7 Valiants started their training session at Bexleyheath Academy. 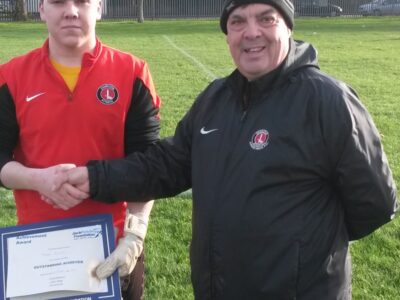 Thomas was awarded the Jack Petchey award for the month October. Thomas has received his award for his hard and continued support for the club and is pictured above receiving his award from Clive Hall Strutt.

Congratulations Thomas from all at the club.