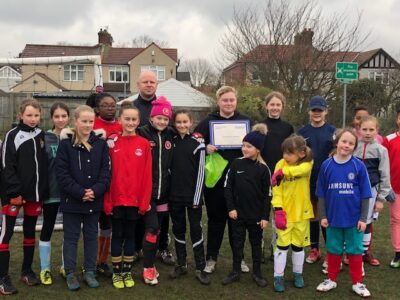 The winner Jack Petchey Achievement Award for January 2018 is Chloe from the Girls U8’s.

Chloe attends each Saturday the U8’s training session, devoting her time to making her group a success. Chloe first appeared as a helper in the late Summer of 2016. Feedback from parents at a recent tournament was very positive and appreciative of her efforts in coaching the Under 8 girls. In addition Chloe helps at the Friday night primary school sessions helping to promoting girls football, which she has been doing for several months.

Well done Chloe from all at Junior Reds FC